Is Bitcoin a good investment?

Is Bitcoin the future?

It’s the latest hype and the investment bandwagon that everyone is jumping on. However, before you join that hype and invest yourself. It’s probably worth understanding exactly what you’re getting yourself into. So today we are going to take a look at the history of Bitcoin.

It was created in 2009 and is at the forefront of cryptocurrency. Digital currencies can be used for a multitude of applications. Bitcoin is a type of cryptocurrency that can be ‘mined’. And when we say mined, this is the digital version of mining. Computers using their processing power to solve problems and in return being rewarded with bitcoin.

There are a total of 21 million bitcoins in existence. At the moment roughly around 18.5 million of these have already been mined. Meaning approximately 2.5 million bitcoins are out there remaining to be mined. Once the limit has been released there will be no more bitcoins.

Investing in bitcoin has become very popular lately due to it’s rising price. Below on the graph from Coindesk.com, you’ll see how the price has risen consistently since the start of the year and currently sits at around £41,000 per bitcoin (BTC):- 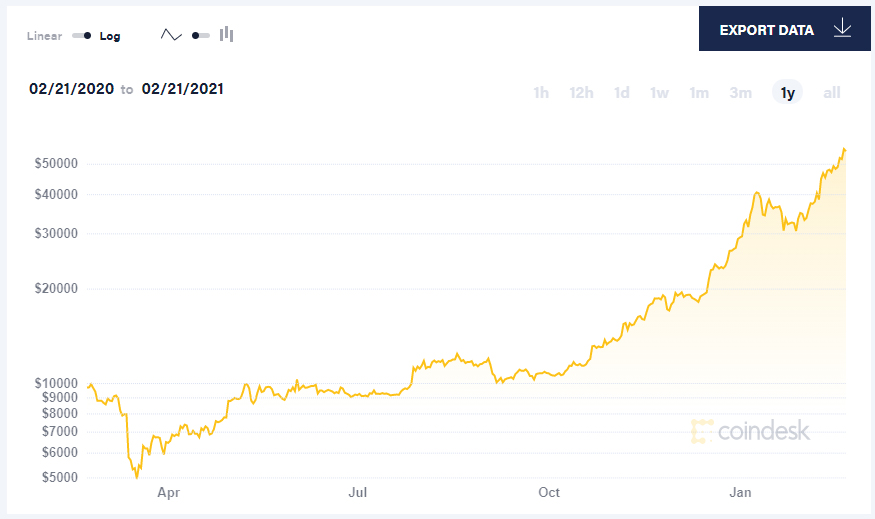 When it comes to investing, like any commodity, some people are playing the short-game and some the long game. Many people since the inception and early days of bitcoins have hedged their bets and tied their money up in bitcoin. With others now becoming preoccupied with day-to-date trading flipping for a profit.

Bitcoin has also been in the news lately as Tesla, spearheaded by entrepreneur Elon Musk, has purchased $1.5 billion of bitcoin. Making the company over $930 million in profit.

So what happens when all of the BTC has been mined? Well nobody can quite forecast what will happen. However, it’s something that won’t be happening anytime soon, with experts forecasting that it will be well over 100 years until this happens. With the reward rate quantity wise for mining being halved in recent years, an equivalent of inflation.

If you want to know more about the world of cryptocurrency and everything else digital why not get in touch with the team here at Laskos.

If you would like to get involved and start investing in your Bitcoin future you can sign up to Coinbase HERE.

Go to Top
Manage Cookie Consent
To provide the best experiences, we use technologies like cookies to store and/or access device information. Consenting to these technologies will allow us to process data such as browsing behaviour or unique IDs on this site. Not consenting or withdrawing consent, may adversely affect certain features and functions.
Manage options Manage services Manage vendors Read more about these purposes
View preferences
{title} {title} {title}